'The Soul of the White Ant', Eugène Marais 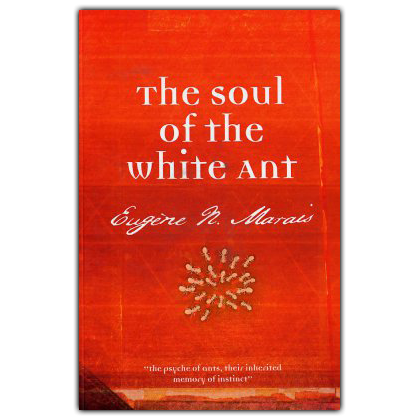 It was a sunny day in Rhodesia when the men came to kill the queen.

I was 5 years old, and allowed to watch. The gang wielded pick-heads that sliced deep into the soil, just next to the wall of our house, in the small Midlands town of Gwelo. It was there that she lay in her lair, deep down and surrounded by courtiers. Again and again, deeper and deeper, the steel picks probed and pierced, exposing a labyrinth of finely crafted tunnels.

But the closer they got to their quarry, the more uneasy I became. I remember no reason - just a growing feeling that what I was witnessing was somehow ... awe-some and mysterious. I looked on, transfixed, as the search continued. Then with a cry of triumph they found her, immobile and defenceless, at the very core of her kingdom, with her panic-stricken retinue scurrying back and forth.

They dropped her into a bottle, screwed the top tight, and passed it round for inspection. I could hardly bear to look at the off-white, bloated creature inside, about the size of a man's thumb, but when I did so it was with a mixture of pity and horror, sadness and distaste.

The men left. They had done their job. The termites would bother us no longer: their lives now had no purpose. The queen ant was dead.

It was about fifteen years later, in the Gwelo public library, that I came across the book that explains my reaction and which moves me to this day, so profound are its insights:

After years of painstaking observation and note-taking, he had come to a momentous conclusion.

In every termitary, he wrote, there is a brain, a stomach, a liver, and sexual organs for the propagation of the race. They have legs and arms for gathering food; they have a mouth: "If natural selection continues to operate, the final result may be a termitary which moves slowly over the veld."

As for the queen ant, it seems I was right to have had a sense of awe all those years ago:

"From this shapeless, immobile object, imprisoned in the narrow vault, there emanates a power which directs all the activities of her subjects, just as our own brain rules the functions of the blood corpuscles and regulates and keeps in order the composite animal we call our body".

It was, said Marais, comparatively simple to illustrate a stunning power: "One can separate a part of the termitary with a steel plate, in such a fashion that there is no communication between the termites on either side of it. Nevertheless the same curve of arch ... is built on either side of the plate."

What I had witnessed all those years ago was not the elimination of a nest of ants, but the killing of a creature, one that was infinitely complex and mysterious.

Marais' conclusion helped shape the way I viewed the world:

"So the hope arises there is some purpose in nature, whose guiding principle is a psyche similar but infinitely more developed than the soul of the primate ... we are as little able to comprehend such an exalted psyche as the termite can comprehend man, who orders his own aims and purposes throughout life."

Decades after I first read those awesome words, they continue to thrill me and to move me, for they pose questions and raise thoughts that go to the very heart of our world.

The great naturalist, cheated by a plagiarist who was awarded the Nobel prize that by rights should have gone to Marais, killed himself with a shotgun on a farm near Pretoria in 1936.